Last fall, we had one of Oregon’s most beloved four-legged VIPs stay in a Vacasa vacation home in Pacific City, Oregon. Rusty Rodas captured the internet’s (and Instagram’s) heart when he was adopted from a local shelter nine years ago. When he found his forever home with Kelsey Rodas, he was afraid of everything at first. New people, strange sounds, mailboxes—you name it, he was intimidated by it.

After a few months, Kelsey and her family took Rusty to the Oregon Coast. The second he hit the sand, he began to open up and act like a regular pup. From then on, the Oregon Coast became a special place for the Rodas family, and they were kind enough to share details of their recent stay in the Vacasa-managed property The Current. This five-bedroom, three-bathroom beachfront vacation home sits right on the sand, so it’s perfect for humans and dogs alike to enjoy the beauty of Pacific City. Read on for more of what Kelsey had to say about her stay. 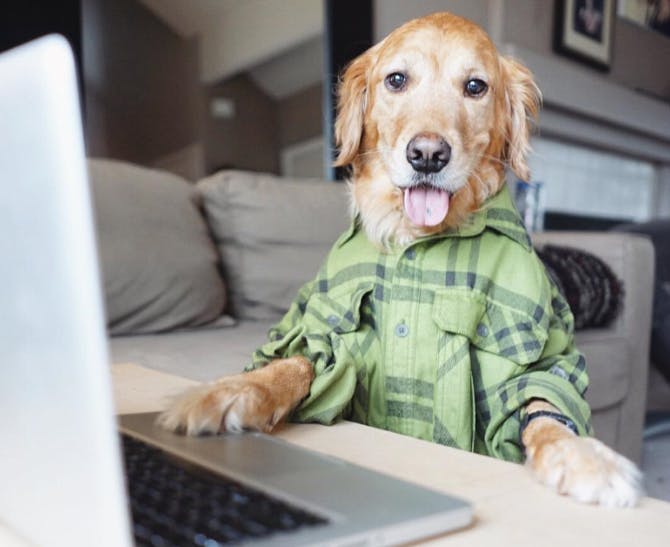 I think it’s safe to say by now that Rusty and I are pretty much inseparable and travel together most everywhere we go. It’s so important to me to find places that not only allow dogs but encourage them! Vacasa has so many pet-friendly properties, so when we started planning our annual trip, it was the very first place I looked. We would have been open to a variety of vacation homes and locations along the Oregon Coast, but when I stumbled across Vacasa’s The Current, there was no going back. I think Rusty might have been giving me some signs as well.

Vacasa’s website is easy to search and book, and within minutes, we were looking forward to our vacation at The Current in Pacific City. For those who aren’t familiar, Pacific City is a quaint coastal town that is somewhat considered a hidden gem compared to other, more popular towns like Cannon Beach and Seaside. This made it extra appealing as we started planning activities for the week. Here are some of our (and Rusty’s!) favorite activities. 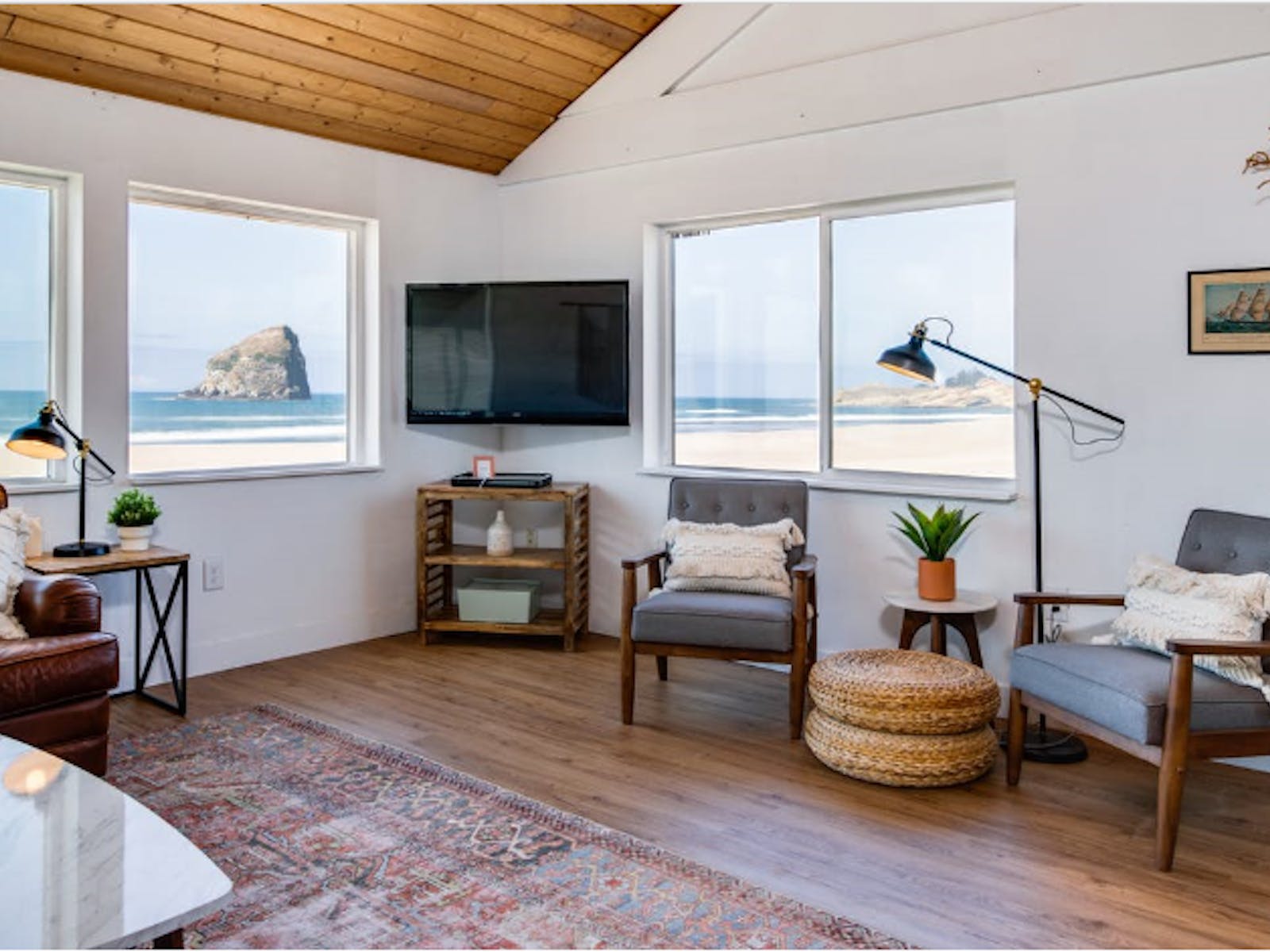 Haystack Rock is considered one of the Oregon Coast’s most recognizable landmarks, and our Vacasa home had views of it no matter where we were standing in the house. Fun fact: there are actually two Haystack Rock formations, one in Pacific City and one in Cannon Beach. The Cannon Beach Haystack Rock is arguably more well known, but Pacific City’s is actually taller. For those who want to take a closer look, the stroll to the beach is quick and enjoyable, and your pup will enjoy the opportunity to sniff the ocean air and gaze up at the birds above. When visiting, it’s important to observe beach safety and the best time is when the tide is low. This also allows you to walk right up to the tidepools and see the colorful starfish and other sea creatures in their natural habitat. 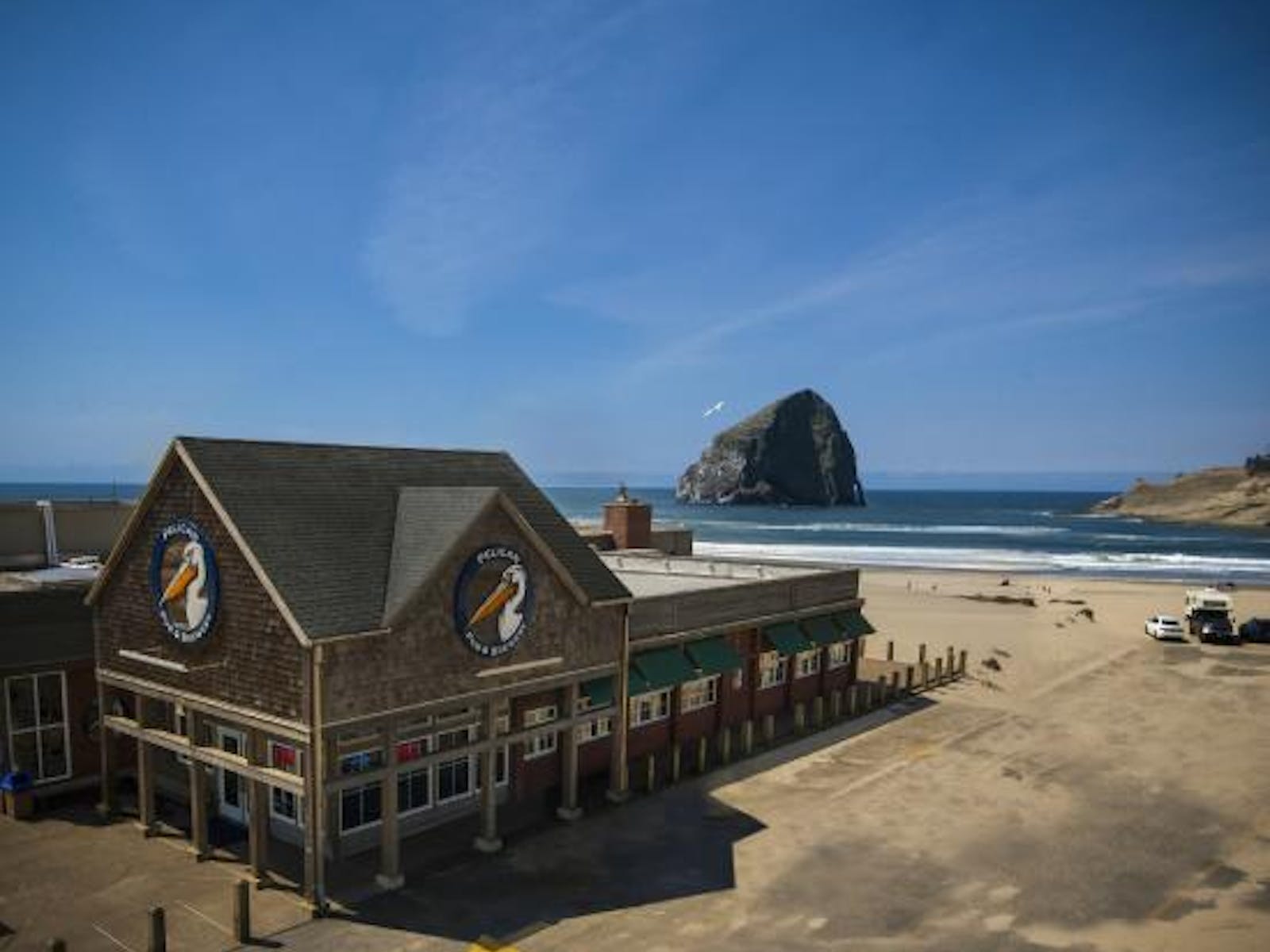 While it wasn’t exactly patio weather when we visited the coast, the world-famous Pelican Brewing cannot be missed. During the summer, visitors and their pups plunk down on the patio and gaze out at the ocean for hours, scanning for surfers and guzzling down a cold one as the afternoon wears on. While Pelican has a few locations along the coastline, the Pacific City brewpub is the first location, giving it that extra-special touch. 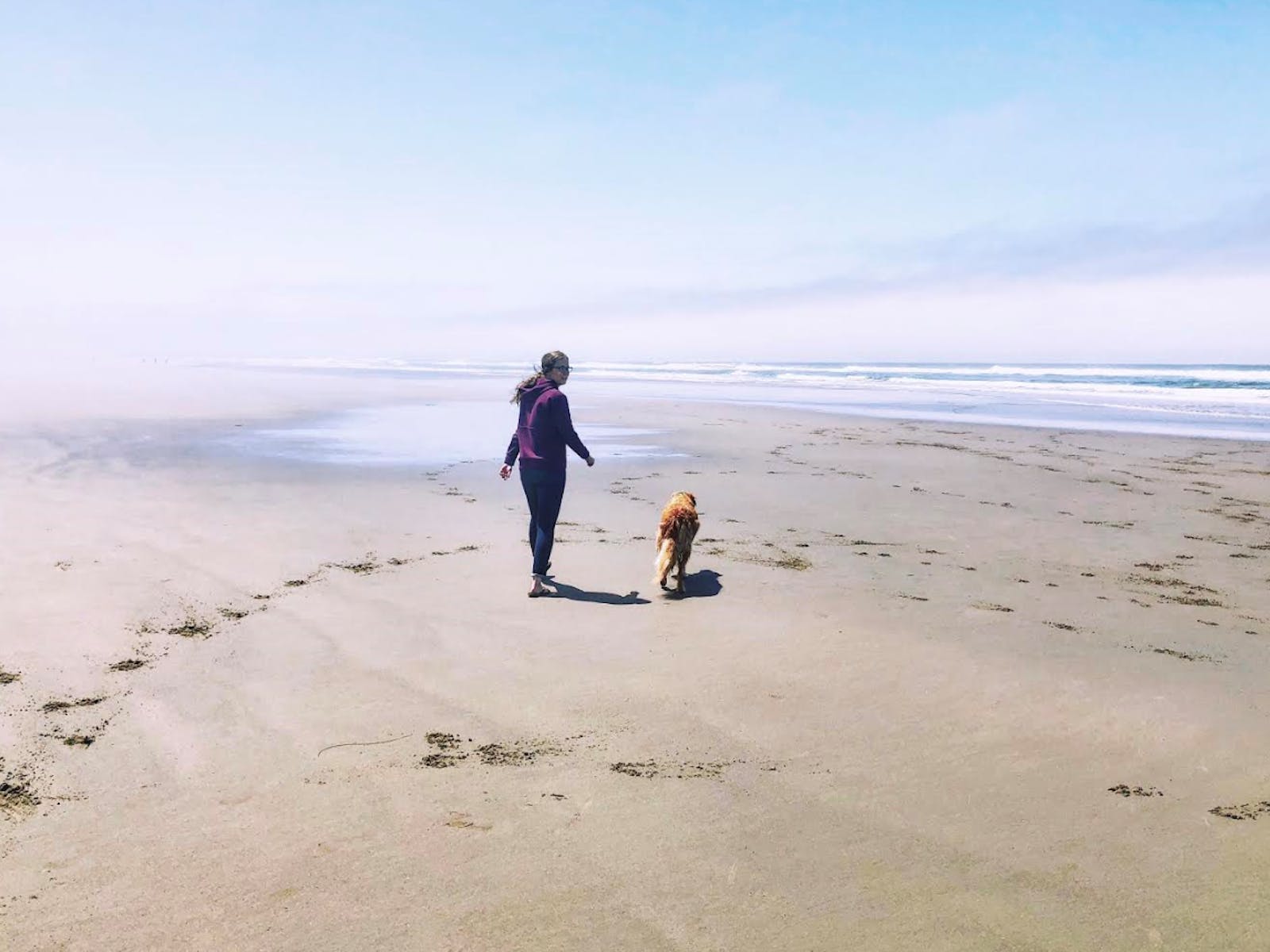 While Rusty can be a little nervous about riding in the car, this particular drive provides beautiful sights for the humans and bountiful sniffs for the pups. Three Capes Scenic Drive can be done in a day and has several scenic stops (think iconic lighthouses and the infamous Octopus Tree) and state parks along the way. If you’re in the mood to do more than stretch your legs, you’ll find short hikes just off the trail. Whether you drive the entire loop or just part of it, you’ll be talking about the gorgeous ocean views for days to come.

While there are a multitude of things to do and places to explore in Pacific City, we found hanging in and around our Vacasa vacation home to be most enjoyable. With the breathtaking views, we were aware of our immaculate surroundings but also enjoyed cooking, doing puzzles, watching some of Rusty’s favorite movies (Air Bud and Lady and the Tramp, to name a few) and just taking the time to relax and enjoy each other. 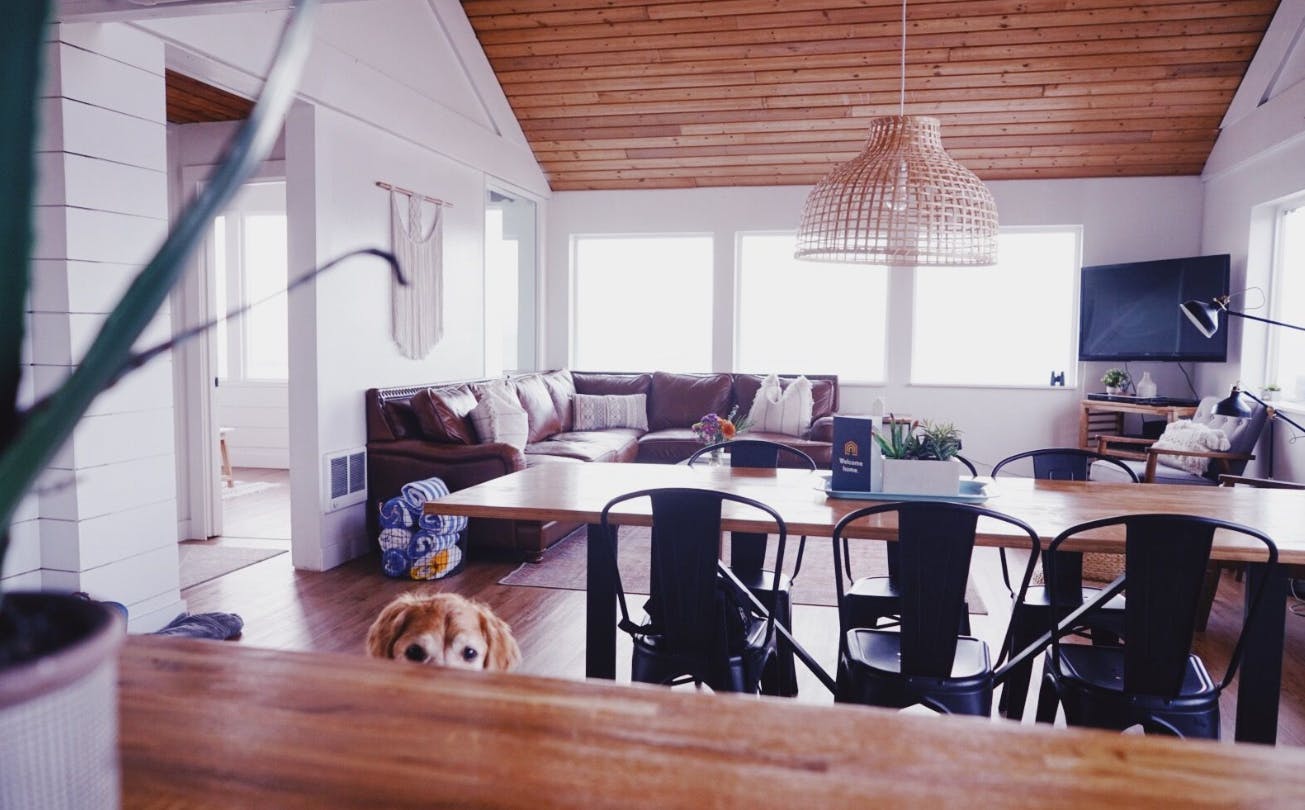 Of course, we spent plenty of time outside the house as well. We had the beach basically all to ourselves, and Rusty enjoyed the opportunity to be free—running on the sand, splashing in the water, and getting all the sniffs in. He also very much enjoyed that the hose in the dog rinse-off area was heated.

So to all you humans out there with dogs, please consider booking a dog-friendly vacation rental for your next trip and be sure to check out Vacasa’s vast inventory of pet-friendly homes. Also, if you own a vacation rental, consider making it dog-friendly. Not only will guests be delighted to bring their best friend along, homeowners can earn 10–20% more in vacation rental income. 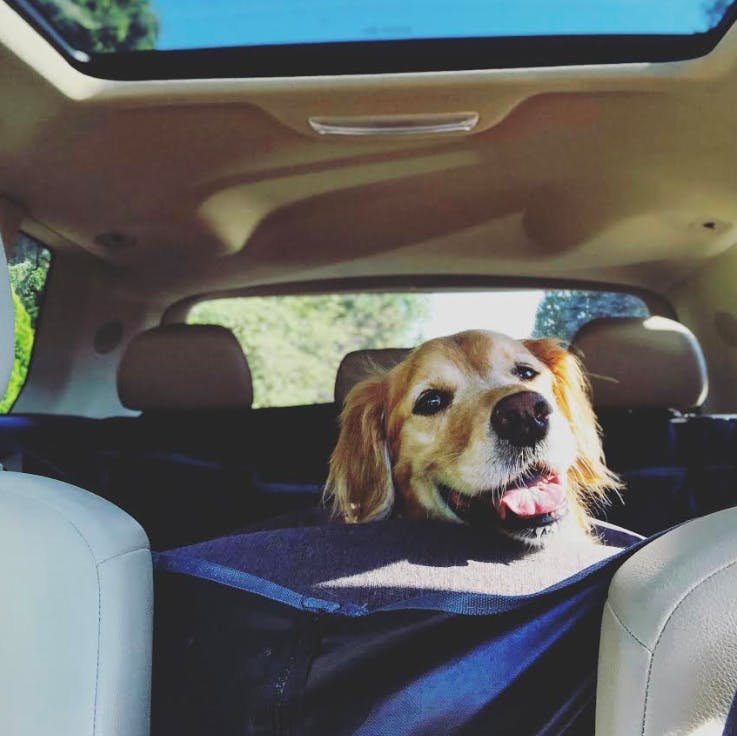 Be sure to pack enough dog food, and make sure your dog’s collar ID tag is updated with your correct phone number. If your dog is microchipped, ensure that you have registered it with your most recent info in case your pup gets away from you for some reason.